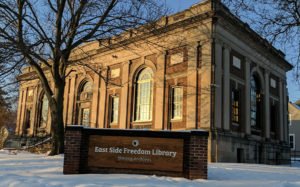 The East Side of St. Paul is host to a unique community gathering place.  Four years ago, the Arlington Library—one of the historic Carnegie library buildings in the Payne-Phalen neighborhood—closed.  Peter Rachleff, 30-year professor of labor, immigration, and African American history at Macalester College and Metro State University, decided to take a bold step.

One year later Rachleff and his partner, Beth Cleary, professor of theater and the arts at Macalester, signed a lease with the City of Saint Paul for the historic building. This was the start of the East Side Freedom Library with the mission of inspiring solidarity, advocating for justice, and working toward equity for all. The library houses non-circulating research collections for the general public and scholars.

Through book readings, group discussions, film screenings, workshops, and public performances, residents and other interested persons can learn about the histories of the East Side and hear the stories of new immigrants.

The East Side is a working-class neighborhood from which much of the labor movement emerged and is home to descendants of Swedish, Norwegian, Irish, and German immigrants. African Americans, people from Latin American countries, Asians, and more recently African immigrants including Somalis have made their home on the East Side.

Storytelling is one important way for people to find out what they have in common. Recently I attended a Neighbors Meet Neighbors event at the East Side Freedom Library where several Somalis spoke about their refugee experiences and how forging new lives in Minnesota has brought many challenges but also hope for the future. I plan to return to this unique gathering place and hope others will also decide to check it out.