The Only Wall We Need 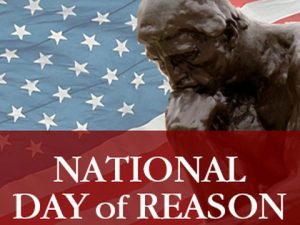 The “wall of separation” between church and state grew out of the First Amendment – as most any student of American history knows. But like so many other constitutional issues, the anti-establishment clause remains open to interpretation even today.  While the meaning of “religious liberty” itself seems to be more fraught than ever, I am particularly concerned that religion has a way of encroaching on the public square – permeating that wall – because so many Americans believe that a god or higher power is necessary to ensure morality – the very morality upon which our civic life is built.

But given our history, it’s really no wonder. Many of the early European colonists who settled in North America came here explicitly to practice their own religion without persecution. The Founding Fathers could not – nor did they attempt to – take away anyone’s brand of religion. The framers wisely devised a church/state separation that kept state-sanctioned religion out of the constitution yet provided for individual religious freedom in the Bill of Rights. It was a monumental feat for its time.

But few of the Founding Fathers – let alone ordinary citizens of the new republic – were ready to disavow religion’s moral authority.  Thomas Jefferson was the most notable outlier in that regard.  Not only had he edited the Gospels to exclude all supernatural references and is credited with coining the phrase “wall of separation,” Jefferson is also quoted as saying, “Reason and free enquiry are the only effectual agents against error.”

On the other hand, in his Farewell Address of 1794, George Washington warned: “[L]et us with caution indulge the supposition that morality can be maintained without religion. . . [R]eason and experience both forbid us to expect that national morality can prevail in exclusion of religious principle.”

While the Founders were successful in designing our government not to be the repository of religious authority, the locus of moral authority remained unsettled in our country.  Hence throughout much of our history, Bible reading was part of the moral and character education of students in our public schools – and in some regions – well into the 20th century.  Without a state religion, the culturally dominant religion came to be used in the public arena as the source of moral authority and provided the competitive advantage in culture wars and public policy debates.  Our history is replete with social movements – antislavery, women’s mpioned and contested.

Even with so many competing religious values at work in our society, religion remains widely accepted as the wellspring and the warden of all morality.  It makes no sense, but so many people and politicians still draw on some religious precept or another to bring gravitas to important events and decisions.  Our politicians look to religious leaders for blessing and they frame their policies according to the religious values of their most ardent supporters.  And they often invoke a higher power to guide their deliberations – just as many of them do on the National Day of Prayer in May.

As a humanist and proponent of secular government, I would argue that we not only need to protect the church/state wall of separation, but we must also strengthen it.  Humanists in particular – but most secularists, freethinkers and atheists as well – believe that we ourselves possess the moral agency needed to govern our civic lives.  The democracy envisioned by our Founding Fathers is based on that same understanding of human moral agency.

This is democracy at its best and that is what we celebrate on the Day of Reason – the first Thursday of May. This year, May 4,  secular people took a stand at the Minnesota state capitol and many others around the country to counter the National Day of Prayer which is held the same day.